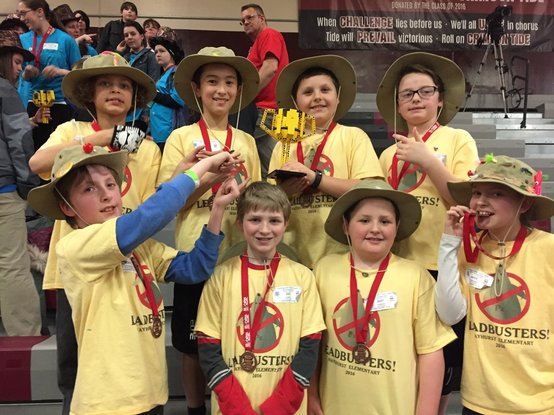 We had a blast at the state tournament!
The Leadbusters had a strong performance in all four categories at the Oregon State First Lego League competition. They placed 11th out of 54 teams on their robot runs and won the 1st place trophy for the IBM Strategy & Innovation Award. "This award recognizes a team that uses solid engineering practices and a well‐developed strategy to design and build an innovative, high performing robot." ​  The team was incredible!!!

Oh my- what a fun week we had!  It felt like old times at practice.  The team is running the board like the champs they are.  They have cut 20 seconds off their run time, which has given them the option to add a mission.  So why not fling some manure and free the panda?  And why not just have a little fun?  They now have the potential to score 178 points.  That's 60 above their high score at the local tournament.

We also had a great visit with our friend, Steve Wille, who was the original inspiration for our project about lead in fishing tackle.  Thanks for coming to see us, Steve!
The team wanted music on this video- so here it is!  133pts!
​We ran the board better on Thursday but we didn't videotape it- darn!

Running the board- Week 2

We won the Core Values Award and we are going to State!!!

Week Twelve- running the board.

Proof that the refrigerator is working!

The Leadbusters doing their team cheer.

Week Nine:  running the board

Week 8: running the board